What Happens If I Get My Eyebrows Wet After Microblading? 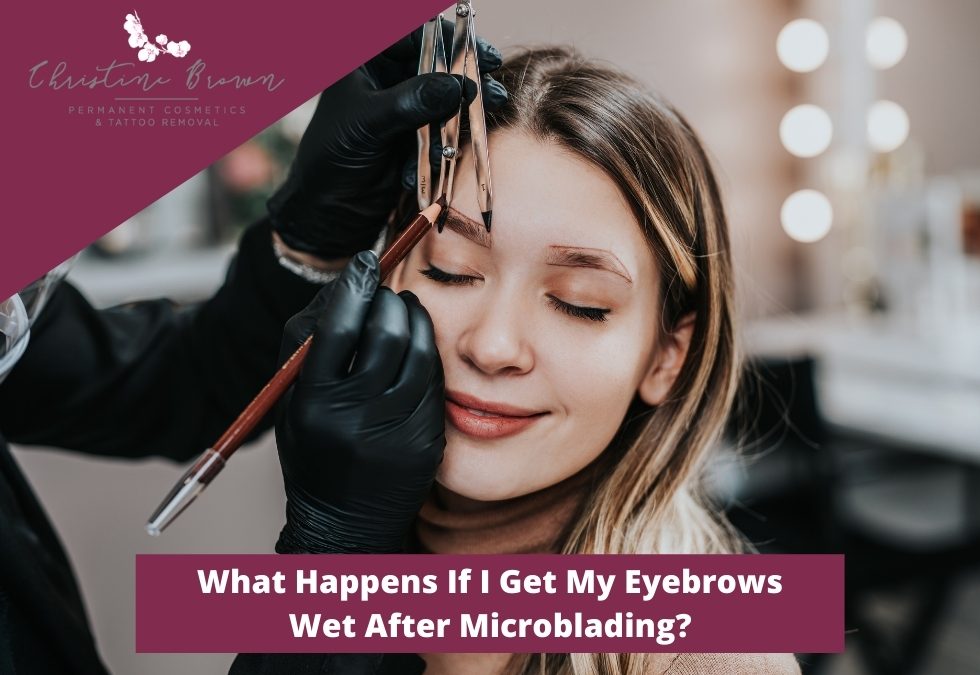 If microblading has been on your mind lately, then keep doing exactly what you are doing right now, i.e., reading up on it! The more you learn and research about the process, the better your eyebrows will look after microblading. As popular as the process is, the procedure and its aftercare are not common knowledge.

Given this blog’s topic of discussion, perhaps it’s okay to assume that you’ve already had the procedure done and all that rule about keeping the area dry is giving you an itch – literally!

Knowledge is indeed power and learning the reasons behind keeping your eyebrows dry and the consequences of getting your eyebrows wet after microblading, will give you the proper motivation to keep going for a few more days.

And if you have already gotten your eyebrows wet after microblading, and panicking through the roof.

Let’s learn in-depth about this aftercare rule so you don’t make the same mistake twice.  Here we go:

Let’s brush up a little on the basics. Microblading, feather-touch, or micro-stroking is a procedure that helps improve the appearance of the eyebrows.

The technique is performed by trained technicians only, however, a special license is not mandatory in all the states. It’s entirely your choice if you wish to go to a licensed technician or a non-licensed one. During the procedure, the technician will draw on your eyebrows using a device with a small blade with multiple needles on its end. The procedure would involve getting tens and hundreds of tiny strokes to mimic the look of natural eyebrow hair. The cuts on the skin are simultaneously implanted with ink.

These eyebrows can last for 1 to 3 years and hence appeals to a large audience that is just tired of drawing on eyebrows every day. The procedure is not complex per se, but it does require proper aftercare and maintenance to get the best results out of it.

If you have ever gotten a tattoo then you wouldn’t find the microblading aftercare all that different. However, since microblading is done on the face and you’re healing but also trying not to lose the pigment in the process, the aftercare has to be a bit more intensive.

Right after the procedure, the eyebrows appear dark and bold and the skin would be a little red. At this point, your prior research will come in handy and you’d know that it’s not the final result. If you hadn’t done your research, you’d be running to your PMU the very next day.

Relax, it is supposed to look like that in the beginning. Most technicians will give you their own set of aftercare rules but it’s pretty much standard to wait for 3 hours after the procedure before applying the first thin layer of aftercare, then every three hours (for the first day). Note that the eyebrow will still be several shades too dark even then. Be patient as it will take 1 to 2 weeks for the eyebrows to heal and the pigment to fade to the shade you wanted.

There’s a lot you need to avoid during the first 10 days after the procedure. Such as:

What Will Happen If I Get My Eyebrows Wet After Microblading?

After microblading, aftercare serves two purposes, healing and pigment retention. Since microblading only deposits pigment on the surface of the skin, it is highly susceptible to peeling and washing off during the first few days. It needs to stay dry while it is settling down in the skin so that your eyebrows will last longer and come out looking good and complete. Water and sweat can wash off the color and lighten the pigment, leaving you with several missed-out spots in the eyebrows.

You can still take a shower and wash your face of course. Just make sure your eyebrows remain untouched. Sweating is to be avoided for the same reason as water, to prevent the blurring of pigment and causing it to wear off. When sweat permeates from the body, it will push the pigment out, causing it to disperse and ruin the uniform pigmentation of the eyebrows.

Hence, every kind of workout should be avoided as it doesn’t take much for us to sweat. You need to avoid sweating and getting your eyebrows wet for at least until the scabbing and flaking has completely stopped.

I Got My Eyebrows Wet What Should I Do Now?

First of all, don’t panic. Wetting your eyebrows will not affect your healing or cause any kind of infection, so you are safe on that front.

Now pay attention, if you only got a few drops of water on the eyebrows, from washing your face or stepping into the rain, you are fine. However, if you ended up taking a long, hot shower for 30 minutes, or went swimming for an hour, then you have likely undone some part of your eyebrows.

So, what happens now? Nothing much. The next time you go for a touch-up, your technician will fix it up. The only downside is that it won’t be a light touch-up but would require a longer session, similar to the one you got the first time. It will hinder your progress and set you back a few more days because you can’t get another microblading so soon after the first until all the scratches have healed.

If you had any big event planned out, we wouldn’t recommend getting your eyebrows wet.

If you’re looking for a Microblading specialist in Raleigh, look no further than the amazing team at Permanent Cosmetics by Christine Brown. Book your free consultation with us today!

Check out our Latest Posts: